The X Olympiad in terms of organization and the number of records surpassed all previous Games, despite the fact that the number of participants was almost 2.5 times less than in Amsterdam – 1334 people from 37 countries. At the Games, 90 Olympic records were set, of which 18 exceeded world records. The United States sent the most representative team – 337 people, that is, almost a third of all participants.

The appearance of the award Olympic medals remained the same as in previous Games. The only new detail is the inscription on the front side: X-th OLYMPIAD LOS-ANGELES 1932 (X Olympiad, Los Angeles, 1932). The medals are minted in the USA in accordance with the rules of the Olympic Charter. In total, 120 gold, as many silver and bronze medals were made. The diameter of the award is 55.5 mm. 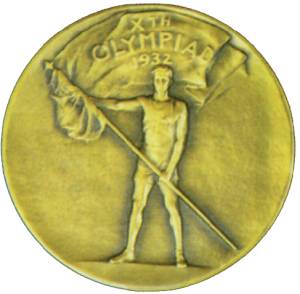 Designed by New York-based artist Giulio Chilenyi. On the front side – the athlete holds the Olympic banner, on which the inscription: X-th OLYMPIAD, 1932 (X Olympiad, 1932).

Regarding other Olympic souvenirs of the X Olympiad, we do not have detailed information.

There are three varieties of a small oval-shaped souvenir badge with the inscription: LOS-ANGELES 1932 (Los Angeles, 1932). The rarest of them is covered with white enamel and made of silver, as evidenced by the test on the reverse side. The badge was attached to the costume with a needle. A silver badge with dark blue enamel appears from time to time in numismatic shops and at auctions, while a bronze badge without enamel was produced in mass production and is not uncommon even today.

Collectors are familiar with a small oval-shaped copper commemorative medal issued in connection with the Los Angeles Games. On it is an image of the famous statue of the ancient Greek sculptor Myron “Discobolus” and the inscription: X-th OLYMPIAD 1932 LOS-ANGELES (X Olympiad, 1932, Los Angeles).

As in some previous Olympics, an art competition was organized in Los Angeles with the presentation of gold, silver and bronze medals on the topics: architecture, sculpture, literature, music, painting.

The official badges of the X Games served primarily to make the people involved in the Olympic program visible in the vast mass of the people. The experience of previous Games was used. Official badges differed in the color of the metal (gold, silver, bronze) and the ribbons attached to them.

The badges intended for officials differed from those received by service personnel. Badges for staff were “buttons” (diameter 88 mm) of various colors and color combinations. On the rim at the top was the inscription: X-th OLYMPIC GAMES LOS-ANGELES (X Olympic Games. Los Angeles). Below – the name of the sports facility: Water Stadium, Shooting Range, etc. Inside, against the background of the American flag, made in the form of a shield, the inscription: Director, Ticket Seller, Operator, etc.

Golden badges were received by members of the IOC and the Organizing Committee of the Games, presidents of national Olympic committees and international sports federations. Silver badges were awarded to secretaries and members of NOCs, international sports federations and judges, as well as heads of sports delegations. Brass badges were intended for team leaders, journalists, athletes received bronze badges. The color of the ribbon served to identify the sport.

This system helped well to figure out who is who at the Olympics. Some badges have a ribbon in the Olympic colors attached. Their owners enjoyed special privileges, including free access to the Olympic Village.

Members of the IOC, the Organizing Committee of the Games, NOCs, international sports federations had such badges. The leaders of the Organizing Committee wore a badge that hung on the Olympic ribbon. Executive titles or the word “Manager” is engraved on the badge. Badges served as a pass everywhere at any time of the day. Persons who had such a badge had the authority to give instructions and instructions for the conduct of the Olympic competitions, they had to be strictly followed. A total of 4089 badges were issued. 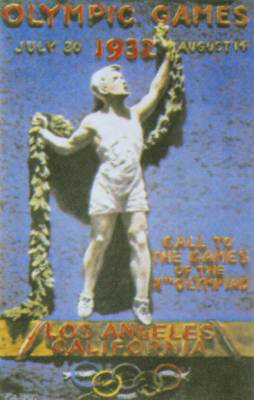 The badges are made of brass, without enamel coating, some of them are covered with gold and silver. Size 40? 40 mm. Against the background of the coat of arms of the United States – five Olympic rings, they are woven into a ribbon with the motto: CITIUS, ALTIUS, FORTIUS! Laurel branch, on the sides – the year of the Olympics, the numbers are broken – 19 to the left of the coat of arms, 32 to the right. In the lower part there is a rectangular plate, which indicated the position of the owner of the badge.

Separate badges were intended for the leadership of the Organizing Committee. They were on a pendant – a block on which staff was written. And the official badge was attached to the suspension.

The plot of the poster released on the occasion of the Games is based on the ancient Greek custom of sending a famous athlete to announce the next Olympic Games and call for an end to all strife and wars for that time. The figure shows a sculptural image of an athlete with a wreath of peace in his hand.

The author is an American artist and sculptor Giulio Chilenyi.

At the 28th session of the IOC in May 1930, Berlin put forward its candidacy to host the 36th Olympics. Together with Berlin, Alexandria, Barcelona, ​​Budapest, Buenos Aires, Dublin, Helsinki and Rome fought for this right.